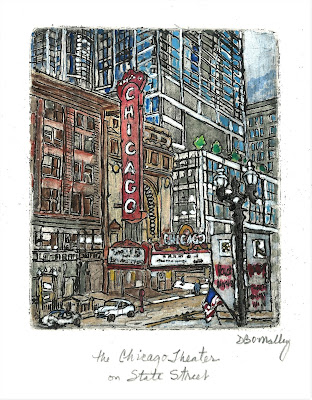 The Wrigley Building is on the Chicago River at Michigan Avenue and is 100 this year.
When ground was broken for the Wrigley Building in 1920, there were no major office buildings north of the Chicago River. The Michigan Avenue Bridge now the Du Sable Bridge, which spans the river just south of the building, was still under construction.
The land was selected by chewing gum magnate William Wrigley, Jr. for the headquarters of the company. The building was designed by the architectural firm of Graham, Anderson Probst, and White using the shape of the Giralda tower of Seville Cathedral combined with French Renaissance details.
The south tower was completed in September 1921 and the north tower in May 1924.
The two towers are of differing heights, with the south tower rising to 30 stores and the north tower to 21 stories. The building is clad in six shades of white glazed terra-cotta. 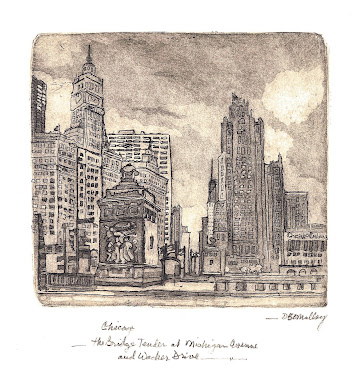 6 x 6.25 inch Aquatint Etching with chine colle
Each of these images are from my portfolio of Etching Aquatints of Chicago.

All visitors must be masked and fully vaccinated. 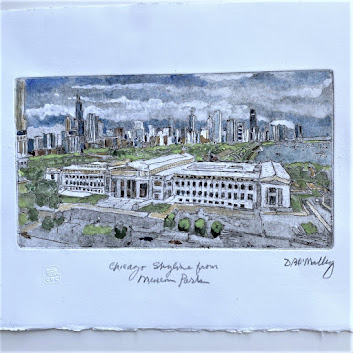 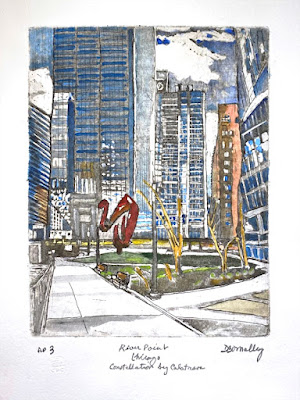 River Point Chicago    Constellation by Calatrava*
Aquatint Etching with hand coloring
9 x 7 inch plate
*Santiago Calatrava (born in 1951) is a Spanish architect, structural engineer, sculptor, and painter.
The sculpture Constellation 2019-2020 is in the park that borders the Chicago River at 444 West Lake Street.
at 10:34 AM No comments: